The ABC National Safety Excellence Awards recognize companies that exhibit a continued commitment to job site safety and whose safety performance and programs are judged to be exemplary by the ABC National Safety and Health Committee. During the selection process, they were judged on self-evaluation scores, lost workday case rates, total recordable incident rates, leading indicator use, process and program innovations and video interviews conducted by members of ABC’s National Environment, Health and Safety Committee.

STEP is the standard for developing world-class safety programs in construction and is designed to help both large and small contractors evaluate every aspect of their corporate safety and health program and identify opportunities for improvement. Saulsbury has been a long-time ABC member and is humbled to add this award to the many received by ABC throughout their partnership in safety.

Click here to read the Pinnacle news release from ABC. 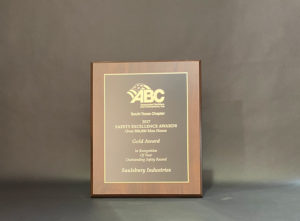 For the fourth consecutive year, Saulsbury has received the South Texas Chapter Safety Excellence Gold Award from ABC. This award is presented to companies who have achieved total recordable and lost time rates lower than the national average throughout the ABC South Texas industrial region.